A look at Summer Glau's fashion and clothing styles. 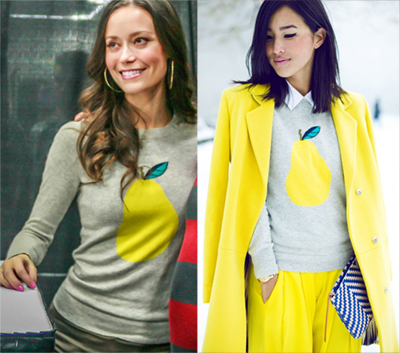 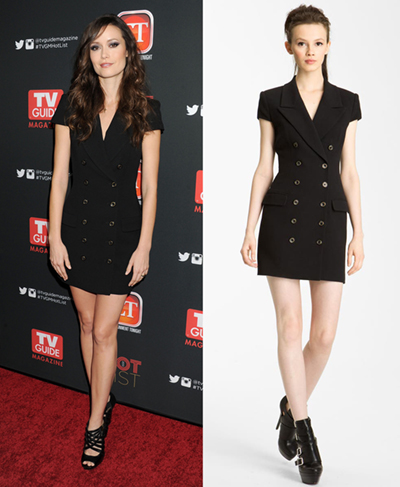 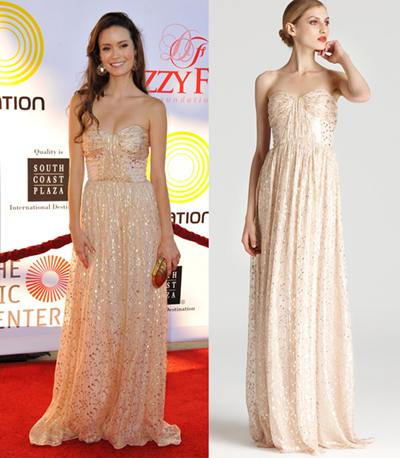 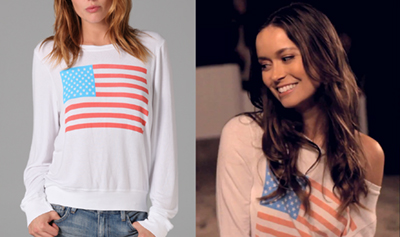 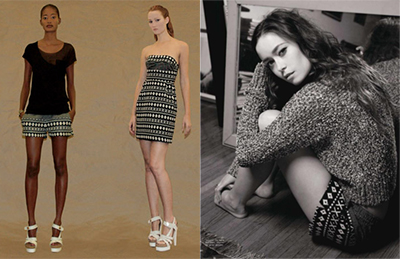 Summer Glau was seen wearing a pullover sweater by Mara Hoffman in a photoshoot for Nylon Guys magazine March 2011. 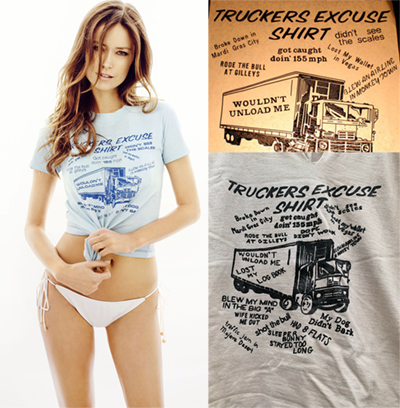 Summer Glau wore a Truckers Excuse t-shirt in a photoshoot made for the "A Woman We Love" section of Esquire magazine March 2011. 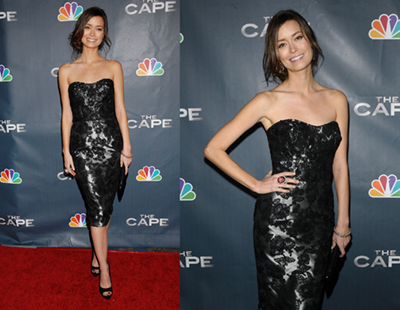 Summer Glau wore a LOVE by Enzoani dress at the premiere party for The Cape at the Music Box Theatre in Hollywood on January 4, 2011. She accessorized her chic look with Sutra earrings and an Amrapali diamond bracelet and statement ring.

The Tina Split Sleeve Blouson Dress by Corey Lynn Calter is gorgeous and breezy, perfect for a summertime garden party or first date! The split sleeve detail and above the knee hemline are classic details while the bold stripes are fun and flirty. 100% Silk. Color is Aqua/Shell (model presented below is in Multi color)
Price: $ 233.00 from CoreyLynnCalter.com (This item is currently unavailable).

This Theory linen blazer features a notched collar and an open placket. Welt bust pocket and flap hip pockets. Vertical seam and 8" vent at back. Long sleeves. 23" long, measured from shoulder. Fabrication: Stretch linen. 62% linen/36% viscose/2% spandex. Exists in black and in white. Price: $335.00 from Shopbop.com (This item has sold out). Summer Glau was seen wearing this Jamilla Blazer by Theory at Comic-Con 2010 on July 23, 2010 in San Diego, California.

Bow back mini dress with a round neck, short cap sleeves and pleated waist by H&M.

Summer Glau was seen wearing this H&M bow back mini dress at the 2010 NBC Upfront presentation at The Hilton Hotel on May 17, 2010 in New York City. Summer accessorized her vintage chic look with a Lucite Chain Heart Necklace by Tarina Tarantino.

Front distressed print features Batgirl on her motorcycle and also features a distressed print of her name written in a funky font above. Fitted through the waist and longer in length. 80% Cotton / 20% Polyester Price: $23.99 at SuperHeroStuff.com (This product is no longer available). Summer Glau was seen wearing this Batgirl Badass Motorcycle T-Shirt at the Terminator: The Sarah Connor Chronicles Panel at WonderCon 2009, held on February 27-March 1, 2009 in San Francisco.

Price: $ 48.00 at UrbanOutfitters.com (item no longer available) Summer Glau was seen wearing this Sheer Button Front Blouse by Kimchi Blue at the Nyakio Grieco launches of Safi fragrance at Apothia at Fred Segal in Los Angeles on March 20, 2008.

Graham & Spencer dress has elasticated and ruched detailing above the bustline, seam side pockets at hip and is fully lined. 100% silk. Dry clean. Price: €303.43 at net-a-porter.com (This item has sold out) Summer Glau was seen wearing this Yellow Silk Mini Dress by Graham & Spencer as she hosted a party at Tao Nightclub at The Venetian Resort Hotel and Casino, Las Vegas on Friday, March 7th, 2008.

Graham & Spencer dress has elasticated and ruched detailing above the bustline, seam side pockets at hip and is fully lined. 100% silk. Dry clean. Price: €303.43 at net-a-porter.com (This item has sold out) Summer Glau was seen wearing this Silk Mini Dress by Graham & Spencer at the "Last Call With Carson Daly" show on February 21, 2008 to promote Terminator: The Sarah Connor Chronicles.

These 1921 flare leg jeans are crafted from the finest Japanese ring-spun denim that’s been cut, sanded, whiskered, and stitched just like they’ve been doing it since the old days—meticulously by hand. Stonewash to a medium shade with just the right amount of fading and distressing; sits low on the waist (7 5/8” rise), slim through the thigh and knee with a flare opening (19” leg opening).

Price: $ 69.99 at SilverJeans.com (no longer available) Summer Glau was seen wearing these 1921 Flare Leg Jeans at the FOX TCA All-Star Party at Pacific Park on the Santa Monica Pier on July 23, 2007 in Santa Monica, California.