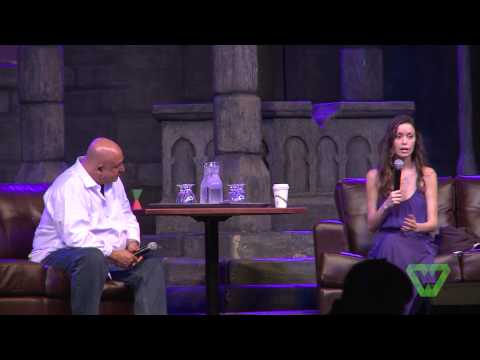 Video of Summer Glau Interview at FantasyCon 2014.
This Southern gal's parents sacrificed so much to provide for her ballet training and education. At 19 it all came to a halt as a small injury turned bad. A broken toe is no big deal but Summer kept dancing on it, ashamed to tell anyone, and eventually it ended her dreams as a professional ballerina. Her foot healed and she began doing other non-ballet dances. She convinced her parents to let he move to LA for the summer. Eventually, a few months turned into something longer and she landed a tiny appearance on Joss Whedon's TV show, Angel. What did she play? You guessed it, a ballerina (Russian).In the video below she says she missed the initial auditions but snuck into the casting call backs and landed the role. This is where she caught Joss' eye. Joss later cast her as River in the delayed hit Firefly. Since then she has starred as main characters and a guest actress in 16+ TV shows most of which have geek theme. She's even been in a few movies.Summer also discusses training for fight scenes, her fiancé, and how much of a role model Summer's mom played in her life.